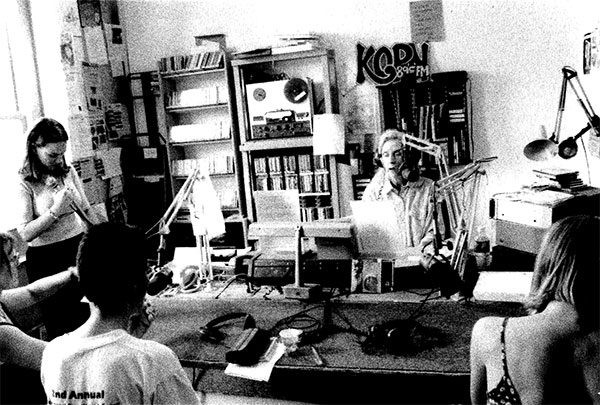 In November 1971 about a dozen people met in the offices of The Issue, an alternative newspaper in Columbia, Missouri, to discuss the need for a community radio station. Motivated by a mixture of 60’s idealism and the conviction that conventional media outlets were ignoring news, viewpoints, music and people vital to the Columbia community, these radio pioneers chose to call the station KOPN to commemorate its openness to all.

In deciding to establish a listener-supported public radio station for Columbia, KOPN’s founders drew upon a tradition that had begun in 1950 with Lew Hill’s creation of KPFA for Berkeley, California. Hill had concluded that the broadcasts of existing radio stations and networks were narrow and homogeneous and did not serve the varied needs of Berkeley’s diverse population. His ambition was to build a station that would be non-profit, non-institutional, listener-supported and would broadcast programming not heard elsewhere, produced by members of the community. Over the next decade, KPFA was joined by open-access, listener-supported stations in Los Angeles, New York, Washington and Houston in an affiliation called the Pacifica Foundation. In the late 60’s, former KPFA personnel Jeremy Landsman and Lorenzo Milam came to the Midwest to create a listener-supported, open-access station in St. Louis: KDNA. The Columbians turned to Landsman and KDNA for advice in order to get KOPN off the ground and on the air. 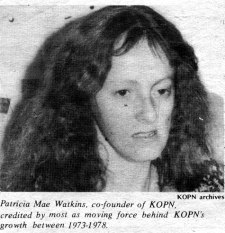 After a year and a half of meetings and fundraisers for KOPN, an application for a non-profit, educational radio station was submitted to the FCC. The station’s frequency was licensed to the New Wave Corporation, a not-for-profit, educational corporation, with an unpaid staff. On Saturday, March 3, 1973, KOPN began broadcasting a monaural signal at ten watts to central Columbia from a third-hand transmitter located in the elevator penthouse of Paquin Tower apartments. The studio was located in a cramped room rented from a crafts and food cooperative, upstairs at 915 East Broadway in the heart of downtown Columbia. The budget for March and April 1973 was $340.81, while $200 in subscriptions were received in March. Despite these humble beginnings, KOPN was only the eighth open-access, listener-supported station in the U.S. and the first to serve an audience of less than 100,000 people.

Since then, KOPN has grown in many ways, and in turn has helped Columbia to grow. Its studios have expanded; its wattage has increased; its audience has broadened; its expenses have appreciated. But more importantly, KOPN has provided Columbia with a wealth of programming not found anywhere else. It was the first source in Columbia for programming by and about women, African-Americans, seniors, children, rural citizens, environmentalists and many other populations often ignored by conventional local media. It introduced reggae, blues, bluegrass, Celtic, salsa, electronic and other music to a new audience in Columbia. Through its dedication to community voices, KOPN has trained more than 1,000 people in radio operations. It brings nationally syndicated alternative news and talk programs to Columbia. It has also resurrected radio drama for a new generation.

The station continues both to reflect and serve its community, and as for KOPN’s future, the possibilities remain OPEN.

Explore KOPN’s first ten years of history. We have had a lot of people, music, and voices pass into KOPN and onto the airwaves of Columbia.

In January, 1973, KOPN studio construction is finished, and on March 3, monaural broadcasting begins at 10 watts on 89.7 FM. The first sound that listeners hear is musical satirist Biff Rose’s “Evolutions.”

The station’s relatively low signal, beamed from a transmitter located atop Paquin Towers apartments, covers only a five-mile radius, and the station prints monthly Program Guides instructing listeners to make their own FM antennae for receiving KOPN.

In the first of many efforts supporting the cause of feminism, the station carries live broadcasts from the first annual Women’s Fair in October.

KOPN expands its offices after the closure of the craft and food cooperative whose space it shared. The station acquires more powerful transmitting equipment from the sale of St. Louis community radio station KDNA. KOPN co-sponsors its first film series and begins broadcasting the Columbia City Council meetings that are mostly ignored by the local media. During the summer, a controversy erupts over KOPN’s broadcasts of “Liberty Lobby,” an ultra-conservative program. While some community voices condemn the station’s choice, KOPN defends its commitment to freedom of speech.

Write up by Pat Watkins for September, 1974 program guide.

With the benefit of its new equipment, in March KOPN begins broadcasting in stereo at 40,000 watts on 89.5 FM (its current bandwidth) and expands its range to fifty miles. This power increase initially brings some complaints about KOPN’s signal being heard on toasters and electric toothbrushes in the area, but the problems are soon resolved. In May, a program produced by and for local senior citizens is begun, and singer-guitarist Bonnie Raitt performs a benefit concert for the station. KOPN management reaches out to allied stations across the country by attending the National Alternative Radio Conference in Madison, Wisconsin in June.

The station improves its facilities by installing much-needed heating and cooling systems. The number of KOPN subscribers grows to 370. KOPN introduces the Columbia area to Celtic music, and “Dark Pulsations,” a program devoted to the voices and concerns of the local African-American community, has its debut. In July, KOPN staffers attend the National Federation of Community Broadcasters Convention in Telluride, Colorado.

Taken from an article written July, 1976.
Join Carol Goodnick, every Sunday 3-5 PM, as she continues the tradition of Celtic music, stories and lore on Strike the Gay Harp.

Queen of the Blues visits KOPN

This interview, although done in 1979, is with Koko Taylor. Koko began doing benefit concerts for KOPN in 1978.

New Wave Corporation’s long struggle to make Columbia a home for public television as well as community radio culminates in the arrival of translator station Channel 56 on the air. Meanwhile, KOPN begins broadcasting a program for the Missouri prison population, “Zebra Sunrise.” The station also carries live studio broadcasts of local bluegrass musicians, and the program “Ionizations” airs live the specially commissioned work of avant-garde electronic composers. In August, KOPN staffers attend the National Federation of Community Broadcasters Convention in Olympia, Washington and in December, the National Conference on Feminism and Radio in Washington, D.C. 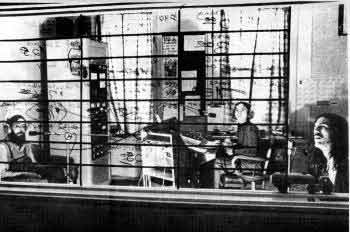 KOPN presents its 3rd annual Fall Pledge Drive. It starts Wednesday September 19th through Sunday September 23rd. This year we are featuring Live radio, plus contests and request shows around the clock.

We want you the listener, to help make this Drive the best in KOPN’s seven-year history. We want you to come and see KOPN at 915 E. Broadway, here in Columbia, and be “live” with us. A booth and display will be set up on Broadway, when we take open-access radio to the streets.

But most of all, we want you to listen. Find out how listener supported radio works. Set your radio dial to 89.5 FM KOPN.

Taken, in part, from a September 1979 KOPN program guide.

KOPN begins broadcasting a weekly program devoted to current issues facing the Missouri state legislature. The nation’s energy crisis inspires the station to produce a documentary series on Missouri’s use of its energy resources. The station continues its coverage of news outside the mainstream media when it carries its first live satellite broadcast, the National Citizens’ Hearings for Radiation Victims, from Washington, D.C. in April; KOPN is one of only 13 stations to do so. By now, 2,000 listeners are KOPN subscribers. Renown experimental music composer Laurie Anderson performs live on “Ionizations” in March. 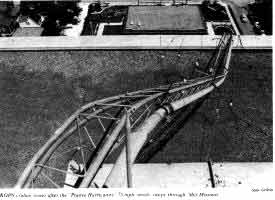 1981: On July 20, KOPN’s transmitter is blown down in a storm, but by dismantling the tower from the now-defunct Channel 56 and transporting it piece by piece from Callaway County, the station is able to resume broadcasting in just six days. In September, KOPN sponsors Columbia Jazz Week. “Caravans,” a program devoted to international music and discussion, debuts. Throughout the year, KOPN expands its literary efforts as well. Continuing its prison outreach work, the station assists in publishing the Journal of Missouri Prisoner Literature and Art. KOPN radio players Dead Air produce six radio comedies during the year. KOPN also helps to originate the American Audio Prose Library project, an attempt to preserve the art of oral storytelling by interviewing and taping some of America’s most famous writers reading their own works; Norman Mailer, Tillie Olsen, and Stanley Elkin are included.

Here are scans of some of the many adds placed in KOPN’s 10th Anniversary paper written by John Poses. Enjoy the congratulations given to KOPN for 10 years of great public radio broadcasting.